Poetry is, I believe, one of the most intimate forms of artistic expression - whether we write the poem, recite the poem, or just identify with the message. This page is dedicated to some of my favorite poets, performers, and artists. ~RJR 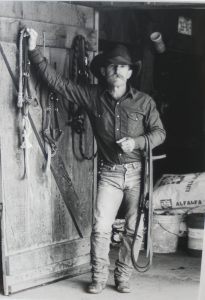 Joel Nelson, in an interview with the National Endowment for the Arts:

Well, the year 2002 on the Chinese calendar was the year of the horse. It rolls around every dozen years if I'm not mistaken. In 2002 the summer of that year I began trying to put together, I guess what I would call to a tribute to the horse because he's been so important to me throughout my life. I stalled out on the piece and then later, in the autumn of 2002, I finished this and I titled it "Equus Caballus," which is the genus and species of the horse. To maybe help a little in the understanding of the piece, I'll talk about the ancestry of the horse a little bit. Evidence that scientists have unearthed over the years would indicate that the horse was not always as he is today. He was at one time a little terrier-sized animal trotting around the face of the globe with toes on all four feet. And it wasn't until probably the Eocene Era that the middle digit of each paw had evolved into what we think of as the horse's hoof. And the digits to either side diminished and are now what we refer to the splint bones in the horse's leg. But this poem is a tribute to that great animal that I ride.

I have run on middle fingernail through eolithic morning,
I have thundered down the coach road with the Revolution’s warning.
I have carried countless errant knights who never found the grail.
I have strained before the caissons I have moved the nation’s mail.

I’ve made knights of lowly tribesmen and kings from ranks of peons
And given pride and arrogance to riding men for eons.
I have grazed among the lodges and the tepees and the yurts.
I have felt the sting of driving whips and lashes, spurs and quirts.

I have suffered gross indignities from users and from winners,
And I've felt the hand of kindness from the losers and the sinners.
I have given for the cruel hand and given for the kind.
Heaved a sigh at Appomattox when surrender had been signed.

I can be as tough as hardened steel—as fragile as a flower.
I know not my endurance and I know not my own power.
I have died with heart exploded ’neath the cheering in the stands—
Calmly stood beneath the hanging noose of vigilante bands.

I have traveled under conqueror and underneath the beaten.
I have never chosen sides—I am the horse.
The world is but a players stage—my roles have numbered many;
Under blue or under gray—I am the horse.

So I’ll run on middle fingernail until the curtain closes,
And I will win your triple crowns and I will wear your roses.
Toward you who took my freedom I’ve no malice or remorse.
I’ll endure—This Is My Year—I am the Horse!